With Thanksgiving quickly approaching, I wanted to share this perfect pie crust recipe! I’ve always been pretty particular about my pie crust, and I have found this recipe to always yield a perfectly flaky crust. Making your own pie crust from scratch may sound daunting, but the end result is well-worth the effort! In this post, am going to share some of the science behind the ingredients and process, so you can achieve a successful pie crust! Baking is a science after all! Your pie will be the talk of Thanksgiving (in a good way)!

The ingredient list for a pastry crust is very basic and only requires four ingredients:

Shortening: The fat used in pie crust should be fat that is 100% fat, such as shortening or lard. The fat serves as a tenderizing ingredient and helps contribute to the flaky texture of the baked crust.  It waterproofs the flour particles, thus forming layers. I personally advise against lard for its slight pork flavor, which I find undesirable in dessert pies. Fats such as butter or margarine are less desirable because they contain 20% water and melt more easily. Oil should not be used for pastries because it will result in a mealy crust without flaky layers.

Water: The function of the water is to hydrate the flour for gluten development, and it also serves as a leavening agent because it produces the steam during baking. Ice cold water should be used to keep the fat from softening and since it is not absorbed as quickly by the flour.

Salt: Salt is technically an optional ingredient, but I think salt is necessary. The salt adds nice flavor contrast to a sweet filling. Sweet + Salty = Perfection.

Pie crust is always prepared with the pastry method. The flakiness is formed from the layers of gluten, which develop as the flour and water are mixed, that are separated by layers of fat. Sounds weird, but that's science for you. As the water evaporates, it produces steam, thus puffing the crust into flaky, but tender layers. The first step is to combine the dry ingredients to incorporate air and distribute the salt evenly in the flour.

Secondly, the chilled shortening is cut into the flour using a pastry blender. The way fat is incorporated into the flour is referred to as “cutting in the fat.” This is usually accomplished with a pastry blender, but a food processor may also be used. Once the mixture resembles pea-sized pieces, it is time for the water.

The ice-cold water should be sprinkled over the flour mixture evenly, one tablespoon at a time. Toss the mixture lightly with a fork and gently shape the dough into a ball. Common mistakes include adding too much water or not cutting in the fat sufficiently, which will cause the crust to be tough.  If time permits, chill the dough to allow the gluten to rest for at least an hour in the refrigerator. This step results in a more tender crust, but it is not required.

When it comes time to roll out the dough, the minimum amount of flour should be used.  The dough should be rolled to about one-eighth of an inch thick and should not be stretched; the dough will shrink during baking if it was stretched.  Some tricks to help with rolling out the crust include using a pastry mat with measurements or rolling out the crust on a sheet of lightly floured plastic wrap.

Work carefully and avoid over-rolling the dough. Once the pie crust is in the pan, let your creativity shine. Try crimping or using cut-outs on your edges. The images in the gallery below should help illustrate this process. Special thanks to my model Olivia! The recipe follows below!

Have a happy Thanksgiving. If you try my recipe, please comment below and let me know what you think! 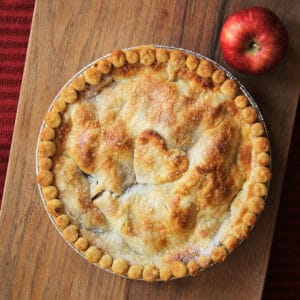 Use this pie crust for any of your favorite pies! It is flaky, tender, and has the perfect amount of salt. This recipes yields one double crust for a 9-inch pie or two single 9-inch crusts.
5 from 3 votes
Print Recipe Pin Recipe
Course Dessert
Cuisine American
Servings 8 slices

Be sure to check out these other great posts!