When it rains, it pours. At least, that seems to be the case for those who grow zucchini (or have neighbors who do). Zucchini is a pretty bland vegetable, which makes it ideal for many recipes. It can be sliced, shredded, or chopped for a variety of savory or sweet recipes. My personal favorite is this cinnamon swirl zucchini bread! This is truly one of my favorite recipes on my blog. More about this bread later...

This year I planted a simple garden consisting of mostly plants that vine out. It probably wasn't the smartest because they are overcrowded for the space, but I have gotten several nice zucchini already! I hopefully will be able to get lots of cucumbers soon. The pumpkins and butternut squash will be ready for harvest in the fall. Unfortunately, the rabbits have found their way under our fence and have annihilated my green beans. I am pretty annoyed by this because I didn't have this issue last year. Gardening is all about learning though I suppose.

To those of you who don't have a garden, I always recommend local farmers markets near you. There is something so satisfying about buying beautiful produce and supporting local farmers. To my Iowa friends, I highly recommend Willhoite’s Family Orchard and Produce. This lovely farm is located just a few miles from my childhood home near Fort Dodge, Iowa, where my parents still reside. This is a family-owned farm that is operated under the leadership of my dear friend Chester. It is incredible how much work Chester and his family do each day throughout the year as growers—and in the winter months, too! You can learn more about them on Facebook and where to buy their produce here. Now that I am living in Illinois, my trips are a bit limited, but I love catching up when I am able!

From left to right is a photo of me, Chester, and my sister Jolene holding her son Brady.

This cinnamon swirl zucchini bread is insanely moist, tender, and packed with cinnamon flavor. It features a cinnamon in the batter, in a swirl layer in the middle, and even cinnamon sugar on top that creates the most delicious topping. I love it best warm from the oven but it is still delicious once cooled. A little melted butter is extra nice if you really want a treat!

For the best bread, here are some of my top tips:

This recipe is so well-liked by family and friends that I usually make a double batch! It also freezes nicely, so it can be enjoyed later in the year too. I have had many zucchini bread recipes in the past that were just blah. However, the cinnamon swirl is a huge upgrade from your typical zucchini bread and really makes it tasty! Trust me, you will see this bread disappear before your own eyes. 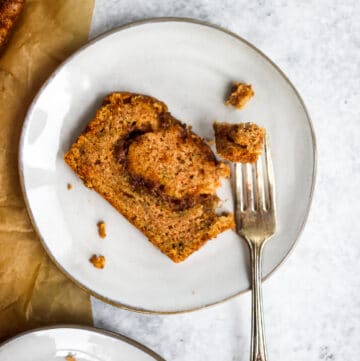 This recipe is my favorite way to use zucchini! This tender and moist quick bread features a cinnamon swirl layer and topped with extra cinnamon and sugar on top. It is one of my most requested recipes and for good reason!
5 from 2 votes
Print Recipe Pin Recipe
Course Breakfast

I recommend peeling the zucchini prior to grating, unless the green specks are desired in the finished product. Before adding the zucchini to the bread, place it in a fine mesh strainer and press out the excess water using a paper towel. One medium zucchini will generally yield about 1 cup. If using a large zucchini, remove all seeds.

Be sure to check out these other great posts!